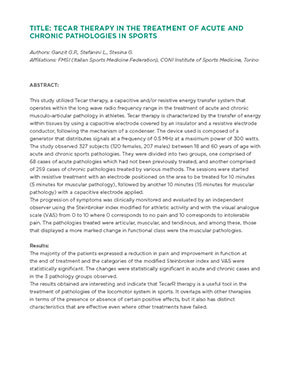 The majority of the patients expressed a reduction in pain and improvement in function at the end of treatment.

This study utilized Tecar therapy, a capacitive and/or resistive energy transfer system that operates within the long wave radio frequency range in the treatment of acute and chronic musculo-articular pathology in athletes. Tecar therapy is characterized by the transfer of energy within tissues by using a capacitive electrode covered by an insulator and a resistive electrode conductor, following the mechanism of a condenser. The device used is composed of a generator that distributes signals at a frequency of 0.5 MHz at a maximum power of 300 watts. The study observed 327 subjects (120 females, 207 males) between 18 and 60 years of age with acute and chronic sports pathologies. They were divided into two groups, one comprised of 68 cases of acute pathologies which had not been previously treated, and another comprised of 259 cases of chronic pathologies treated by various methods. The sessions were started with resistive treatment with an electrode positioned on the area to be treated for 10 minutes (5 minutes for muscular pathology), followed by another 10 minutes (15 minutes for muscular pathology) with a capacitive electrode applied.

The progression of symptoms was clinically monitored and evaluated by an independent observer using the Steinbroker index modified for athletic activity and with the visual analogue scale (VAS) from 0 to 10 where 0 corresponds to no pain and 10 corresponds to intolerable pain. The pathologies treated were articular, muscular, and tendinous, and among these, those that displayed a more marked change in functional class were the muscular pathologies.

The results obtained are interesting and indicate that TecarR therapy is a useful tool in the treatment of pathologies of the locomotor system in sports. It overlaps with other therapies in terms of the presence or absence of certain positive effects, but it also has distinct characteristics that are effective even where other treatments have failed.